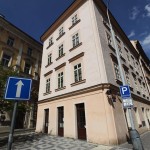 Things are about to change though now that Paul Day is on the scene. As the person who helped Nahm in London to achieve its Michelin star and an ex Nobu chef, Paul has just opened Sansho restaurant. Apart from the fact that his menu is Asian-inspired, he is also following the new trend of not having a menu at dinner – a first for Prague. The place only opened in April 2011 but already it’s packed out most nights. Day is keen to support local farmers and gets his organic eggs and vegetables locally, along with his beer from a Czech owned microbrewery. Prague has the largest Vietnamese community in Europe; through contacts he has made, Day gets supplies sent in direct from Hanoi.

A qualified butcher, Day is also keen to encourage a revival of skills lost during the years of Communism. Most restaurants import their meat from places such as Argentina; he is keen to support local farmers and is planning to open a butcher’s shop in the autumn. For the time being, his restaurant is taking up every hour he has.

The small, unpretentious restaurant has both communal and individual tables as well as an open kitchen. Rather than spending thousands on fancy tables, chairs and accoutrements, Day has deliberately gone for an understated look.  The focus is definitely on the food. At dinner, a six course-tasting menu is around £27.00 per head at current exchange rates. For this price, you may temporarily leave Prague and set off on a mini food journey to the East.

Starting with salmon sashimi followed by pork belly with watermelon salad and then fried squid, you work your way through chicken sate, duck sliders and then beef rendang. Finally, the sticky toffee pudding arrives to render getting up from the table almost impossible. The menu changes regularly. Vegetarian alternatives are cheerfully provided with notice.

When he’s not too busy, Day will come round and ask you about the food. If you are pleased, a beam spreads across his face. I imagine he may be smiling for a long time to come.