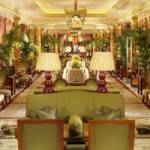 Everything you have ever heard about The Dorchester Hotel, London is true – it is one of those places that does live up to the hype. It’s just across the road from Hyde Park (you may request a room overlooking it) and a mere 10 minute walk to Oxford Street.

But it’s much more than somewhere expensive, handy for the West End.  It really is a rather special luxury hotel; the staff will afford you the same careful attention whether you are a sheikh or a secretary.

The rooms are spectacular.  With their own hallway, noise from neighbours is a thing of the past.  There is a separate dressing room with ample wardrobe space. Perhaps over-fussy for some, I love the sumptuous furnishings and the slightly busy feel.  It’s warm and homely; it seems like a very rich relative’s guest room, rather than a hotel bedroom.  With a bathroom as large as my bedroom, it really is somewhere in which to indulge yourself.  As well as his and hers sinks, there is a bidet and handy electric magnifying mirror.  Fully tiled in greyish white marble, the bathroom’s centrepiece is a huge bath, which has its own crest, in case you forget where you are.  Thick white robes and matching slippers, Floris toiletries, a single orchid in a vase – before you know it you are turning on the taps, even if you had not planned to take a bath.

The bed is size of a small car – over six feet wide and at least seven feet long with two rows of three pillows.  A chaise longue and armchair encourage you to relax and unwind yet more.

If you are so minded (and we were) a trolley can be provided with a kettle so you can make tea and coffee yourself without calling room service.

The bar is a great place for perfectly made cocktails and people watching, but stick to just a couple as the bill might make your eyes water.

The main restaurant is expensive and French and has just won its third Michelin star.  There is also the Grill Room and the China Tang restaurant.  The latter was very busy when we visited; I felt it was overpriced and underwhelming.  With most London restaurants a short taxi ride away, you may prefer to take your pick from them.

Breakfast in your room is an extravagance not to be missed.  You choose anything you want, from an extremely comprehensive list.  Healthy, Japanese, Full-on Cholesterol Overload – you take your pick.    A huge wheeled trolley, with starched linen cloth is carefully brought to your room, at a time to suit.

To take full advantage of the place, arrive early and leave late; there is no point in staying here if you are just going to sleep; it’s somewhere in which to wallow.