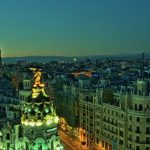 Madrid is more sophisticated than its sister Barcelona and superior to its distant cousins on the south coast.  Spectacular buildings and statues, fountains, wide streets with plane trees, shops, good restaurants, museums, and galleries – what else could one want?  Add to that the fact it is spotlessly clean, easy to get around and the reputedly rude Spanish waiters are either only found on the Costas or only exist in old British sitcoms – and you have a city of dreams.

We stayed at a smart hotel (Grand Menia Felix) just out of the centre but convenient for most attractions.  Booking on-line and in advance can get you very good deals here.  We decided on room only as the food was very expensive, but I expect some people are prepared to pay for the convenience. The hotel was superb and our room was quiet, spacious and luxurious.

Our main mission on this trip was to seek out vegetarian restaurants but we still had time to enjoy Madrid.

Because breakfast at the hotel was not included, we headed to a lovely café near our hotel we had seen from the taxi the day before.  Terraza del Espejo is Art Deco in style, rather like a smaller version of the Palm House at Kew.  It had smartly dressed waiters, fresh coffee and buttery croissants.

We had worked out that the sensible way to get round the city and see some of the sights is by the Madrid Vision open top tour bus.  This runs two circular routes that cover most of Madrid and you get on/get off as you please.  Taxis are cheap and plentiful but they drive at breakneck speed.

Madrid has numerous shops of note – my favourite was El Corte Ingles department store, of which there are several branches.  Spanish women are just as stylish as the French and this is reflected in the number of fashion stores in the city.  I didn’t expect to buy any clothes in Madrid, but found myself flexing the plastic on at least two occasions.

Saturday night arrived and by now being in (working) holiday mode, we headed for the famous Museo Chicote bar, where Hemingway dodged bullets to rush in here, sink a few cocktails and then continue up the hill to post his latest instalment.  We enjoyed cocktails, a beer or two and soaked up the atmosphere.

Monday morning saw us at the Sofia Museum. There is a lot to see here but our main quest was the Guernica painting by Picasso.  It was much larger than I expected and quite shocking to see the stark, haunting images so close up.  Picasso had been commissioned by the Spanish Government to paint a mural but when the bombing of Guernica happened, he changed his mind and started to work on this anti-war piece named after the bombed town.  It was completed quickly and ready in 1937.  In 1940 when Paris was occupied he handed out photos of Guernica to German officers. When asked “Did you do this?” he replied, “No, you did.”  “Guernica” has travelled extensively but Picasso’s wish was that it should end up in Spain, but only “after Fascism”.

In the evening we headed for the Café Central.  This is a bar that features live jazz and on the night we visited the four piece ensemble was superb and soon we were toe tapping with the rest of them.  For a few extra Euros, you sit with your beer and enjoy the music.  We stayed until nearly midnight – the thought of packing and an early morning flight persuading us back to our hotel.

If you fancy a break abroad with plenty to do and great food, I can think of no better place than Madrid.  The acid test: I can’t wait to return.

We flew using Easy Jet from Gatwick.  The earlier you book, the cheaper it is.  Stick needles in your eyes if you must but don’t stay at the Gatwick Hilton.  The noise of the air conditioning kept us awake all night, plus you are trapped in Gatwickland and have to eat in the terminal.