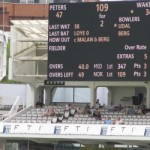 Sick of football and tennis? The best thing about this tour is that even if you are not a cricket fan, there is a lot to see and learn; the knowledgeable guides make it really interesting. Of course our cricket-mad friend, over from India, was happy just to be walking on the sacred ground.

Our little group assembled at the entrance and then we walked along the back of the stands to the nursery ground. I assumed it was where the players practise, hence the name, but in fact it used to be a plant nursery until it was sold to the MCC in the 1870s.Prior to that in the previous century, cricket used to be played by the gentry around Islington. It was an excuse to have a flutter.The games became so popular, that some players wanted more privacy, away from the riff raff. Thomas Lord started to look for a suitable ground and organised a match in Marylebone; the Marylebone Cricket Club was thus formed. After a few moves, the MCC settled in St John’s Wood, where it remains today. The matches became very popular, attracting large numbers, so a pavilion was built to accommodate spectators. Prior to 1864, the wicket was prepared by allowing sheep to graze on it, but after that date, a grounds man was appointed and the club acquired a mowing machine.

The Media Centre is an egg-shaped aluminium structure at the top of the stands, 15 metres above the ground, still looking new although it’s been in place for ten years. Journalists have excellent facilities and a premier position from which to watch all the action.

There are several stands surrounding the field and it’s only by visiting one can appreciate the scale of the ground and soak up the atmosphere. A county match was in progress on the day we visited, which was an added bonus, but it did mean a tour of the pavilion, used by the players, was not possible. We could though see the privileged positions of the private boxes for the likes of Paul Getty and Mick Jagger.

Our tour ended with a chance to see the museum, holding the very small urn containing the Ashes and a visit to the well-stocked shop.

Tickets cost £14 per adult for a 90 minute guided tour. There are three tours a day, seven days a week at 10am, 12 noon and 2pm. The ground is a short walk from St John’s Wood tube station.