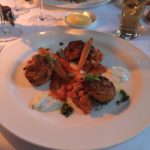 My kingdom for a plate

When the fashion for serving food in or on something other than a plate first caught my attention – what, ten to fifteen years  years ago? – it was a bit of a novelty. I can remember having French fries served in a mini chip frying basket and thought it was rather cute. But now, it has become something of an epidemic. So much so, that Ross McGuinnes set up @wewantplates on twitter and has a following of 37K (update 110K 2016) so I can’t be the only one who is irked.

It’s gone beyond a joke to being frankly, bloody irritating. I’ve had butter piped into a kilner jar, growing herbs in flower pots I’m supposed to snip off myself; French fries served in mugs, and so much food presented on a slate I’ve lost count. At a Michelin-starred restaurant recently, the food was good but what I came away with was how pretentious the chef was. In one meal I had butter piped onto a rock, salad in a glass jar, bread in a sack and cheese on a plank. The main meal was served on what looked like giant china pavlova bases. The cheeseboard was over complicated and included a shot glass of apple juice, a petri dish of sunflower seeds and aforementioned green salad, both unwanted. Cheese and (just) biscuits anyone? Forget it. Service was slow; I’m not surprised with all the faffing about carrying those intricate items. And the wash up area must have been a nightmare.

Slate belongs on roofs and breadboards in domestic kitchens; anyone knows how unhygienic they are. By contrast, I had a lovely meal served on – quelle surprise – a regular white plate in Ireland last month (pictured) and could have wept with relief. Come on chefs, just serve really good food. That’s what we want.

What do you think?