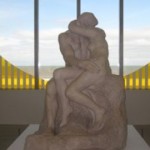 There was a buzz around the Turner Contemporary in Margate as Rodin’s over-life sized marble sculpture ‘The Kiss’ arrived in early October 2011; nearly 4,500 people streamed into the museum over the following weekend to see it.

The work, in the entrance to the gallery, is displayed against a backdrop of the sea.

The lovers are Paolo Malatesta and Francesca da Rimini, who appear in Dante’s Inferno, which describes how their love grew as they read the story of Lancelot and Guinevere together. The book can just be seen in Paolo’s hand.

Raised on a plinth, the lovers are just about to kiss, their lips not quite meeting, when according to the story, her jealous husband interrupted them and killed them both.

The original is in Paris but the artist made two more copies. An American collector who lived in Sussex commissioned the third, seen here. When the sculpture arrived in Lewes, it was put in a stable, being too big for the house, where it remained for ten years until it was loaned to Lewes town council and put on display in the town hall. It was too erotic for some of the residents, who started a campaign for its removal, so it went back to the stable in 1917, where it remained until the owner’s death in 1929. Unable to meet its reserve at auction, it was loaned to the Tate, who eventually bought it in 1955. It was loaned to Tate Liverpool in 2007, but its usual home is Tate Britain, in London.

The sculpture was voted the public’s favourite artwork in a 2003 poll.

Entrance to the Turner Contemporary is free.  Closed Monday except Bank Holidays.